Biomechanics analysis is dominated by dynamically-typed languages like Matlab, R and Python.

In this talk, I'll present several projects that were instead completed in Scala, and demonstrated clear benefits from using types and higher-level abstractions. This work included processing and visualizing motion capture data in Scala.

It has previously been published in refereed journals, but never previously described at a Scala conference. The work was completed with collaborators from Michigan State University, the Structure and Motion Laboratory at the Royal Veterinary College and the University of Melbourne. 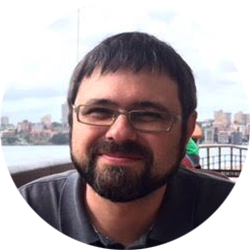 Jonathan Merritt is a software engineer in the finance sector in Australia, writing code in Haskell and Scala to support data scientists to develop large-scale predictive models.

Before joining the tech industry 2 years ago, he completed a PhD on equine biomechanics followed by 10 years on the post-doc treadmill; dissecting human cadavers, building photogrammetrically-guided robots, testing horseshoes that had an in-built inertial navigation system, and doing motion capture in horses.